Walking Off Campus- Are They Really "On Their Own"? 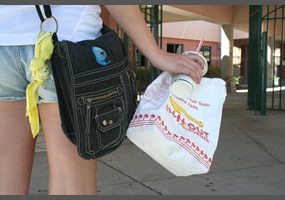 Ever since schools began teachers have been managing students "skipping class" or leaving campus mid-day.  While this issue is taken very seriously at the elementary level it isn't always the same for middle and high school students.  All to often it is assumed that the student voluntarily left and they are now "on their own".  And while there may be consequences for that student the next school day little is done to retrieve them when they leave.  Two recent court cases, one in Connecticut and the second in Washington state may change administrators views of students skipping class and leaving campus.

In the Connecticut case a 14 year old cheerleader skipped after school practice and went with a senior off-campus to Burger King...or so she thought.  After leaving campus with the senior she was taken to his house and raped.  In the second Washington state case a student skipped class to smoke a cigarette and was struck by a car while off campus.

In both of these cases the students filed suit against their school for negligence.  The lower courts both ruled that the school district was immune since the students voluntarily left the school campus and severed the custodial relationship with the school.  Unfortunately the upper courts reversed these decisions stating that the schools have an obligation to protect the students (even from themselves and while off-campus).

Now both of these cases have some unique circumstances but the overriding lesson thus far in these proceedings is...we need to be more vigilant in how we manage middle and high school student walk-off's.  The courts appear to be leaning toward holding schools accountable for what happens to our older students even after they leave our campuses.

If you want to look into these court cases for more detail: