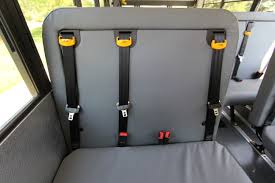 When Johnny hops in the back of the mini-van with his soccer buddies and one of them forgets to buckle up mom or dad look in the rear view mirror and remind everyone to fasten their belt before they pull out of the driveway.  It happens.  Sometimes kids forget, sometimes they are lazy, sometimes it doesn't latch on the first try and they just think... "whatever".  Their kids.  Who is going to make sure that every child is buckled up on the bus?  Surely we can't ask the driver to assume this responsibility?  It is not even practical to image a driver being capable of monitoring seat belt compliance and drive the bus!

Recently the fed made a recommendation to equip all school buses with seat belts.  Sounds like a great idea.  Who could oppose keeping kids safe?  But before schools go out and have all their buses retro fitted with seat belts lets consider some of the potential issues.

That leads us to a real problem.  Let's say  there is a minor bus accident and a few kids gets bounced around because they weren't buckled up. Fortunately they were minor injuries but it was still a traumatic event.   Mom and dad are going to argue that the school was acting as loco parentis  (a fancy term latin that basically means a replacement parent) during that time and the school should have made sure their child was properly fastened in their seat prior to the accident.  See where this is going?  So what is the solution?  Hire seat belt monitors that roam the isle and make sure Johnny stays buckled up?  That is going to double the labor costs of bus transportation.  What about technology?  The driver would have a screen on the dash that would show occupied seats and whether they are green or red, indicating if the seat belt is fastened.  So what happens when the seat belt is unfastened while driving down the road because Mary wants to sit with Susan?  Or the smart kid fastened the seat belt buckle and doesn't even climb into the harness.

Sure seat belts are a great idea.  Everyone can agree to that. But before equipping your school's buses with seat belts or the legislator making it the law of the land; let's pause and really think  through this.  We may discover some unintended  consequences that are harder to manage than originally anticipated.

This is John Baker for safetsolutions4schools.com.